A Coach Who Taught from Experience 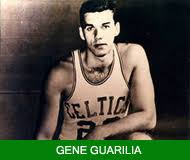 Gene Guarilia was my high school gym teacher. He also taught health classes at the school and had been the basketball coach for many years before I arrived at the high school. He was enormous. Six feet five inches, although he looked a hell of a lot bigger than that. He was known by many names. Whether it was Big Gene, the name all students called him behind his back, Pecos, the name his friends used, or simply Coach, as he was known by the legion of young men he led onto the hardcourt, everyone spoke of him with respect. Gene carried with him a history that was known by many but rarely spoken of. Especially by him.

Gene was born in the coal regions of Pennsylvania, in a small town famous for its pizza, Old Forge. September of 1937 was the beginning of Big Gene’s story. It was a story that would span many miles and many days.

From the very beginning Gene loved the game of basketball. As a young boy, and later a young man, he could most often be found on the playground, ball in hand, shooting foul shots. His dedication and commitment to the game pay dividends. He became a star in high school. As a matter of fact, in 1953 he said a state record for most points scored by a freshman, 595.

His many talents in the basketball court enabled him to attend George Washington University on a scholarship. 30 point college basketball, at one point averaging over 17 points a game and reaching the top ten in the NCAA in rebounding.

For all the students of my generation knew, Gene was a musician when he got out of college. In our era, he was the bass player for a very popular band. We had seen him play many of the local fireman’s picnics and most of us thought that that was where his true passion lie. It turns out of his true passion was coaching. Hear the first successful run as her local high school coach.

What many of us were unaware of the fact that Gene was an NBA player after college. His knowledge of the game when he was coaching was evident and most players couldn’t understand how their coach had come by such a deep and total understanding of the game.
The fact of the matter was, Gene played for the Boston Celtics. Gene played with the Celtics from 1959 until 1963 and during that era

Boston was a dominant team. In a brief span of four years, Gene was a member of four NBA world championship teams.

Gene once told me that he left the Celtics after four years because he wanted to take a job that led to a more stable home environment. That job was teaching and coaching. Gene said he left the NBA because the local high school had offered him $2,100 to be a coach and a teacher. Which was more money than this four-time NBA champion was making playing basketball.