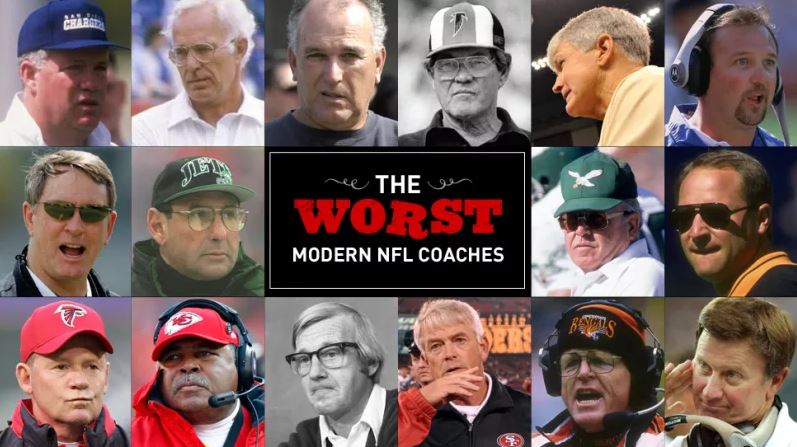 Being a National Football League head coach comes with little to no job security. You can easily round up the coaches that are untouchable in the league at the moment on just one hand. However, coaching jobs in the NFL will always reign supreme for those that are insane enough to choose this career. We frequently see head coaches in the NFL get sacked after one or two years due to minuscule reasons, for something out of their control, or due to the fact that they simply bad at their job. We, therefore, decided to showcase NFL coaches that were not capable of leading a team to glory during their careers.

Mike Mularkey replaced Ken Whisenhunt after Week 8 of the 2015 NFL season, giving him the perfect opportunity to prove his worth as a legitimate head coach in the NFL for the Tennessee Titans who decided to make him permanent during the offseason. Including the 9 games for the Titans in the previous season, Mike has been made head coach on three occasions, 2 years for the Buffalo Bills and only 1 season for the Jaguars, giving him an 18-39 overall record. This does not instil loads of confidence as a head coach.

As a Pittsburgh Steelers defensive end, Bill McPeak managed to find loads of success. He went to the Pro Bowl on 3 occasions during the 1950’s. However, as a Washington Redskins head coach, he didn’t find the same glorious success. During 5 season on the sidelines for the Redskins, the team never managed to finish with a .500 record. During his brief tenure, the team could only muster up a record of 21-46-3. Although he never received another head coach position after that, he did manage to become the Miami Dolphins’ offensive coordinator.

Darryl Rogers managed to receive the ultimate opportunity in 1985 to coach the Detroit Lions, a team that he loved for pretty much his entire life. However, his time as a head coach did not work out too well. In less than 4 seasons as the head coach for the Detroit Lions, Darryl Rogers only managed to win a total of 18 matches and lost a total of 40 during the same time frame. Therefore it’s no surprise that the organization decided to replace him after only 11 matches in the 1988 season.

Shula is undoubtably considered the worst head coach when it comes to the modern era of the NFL, spending 5 years trying to lead the Cincinnati Bengals to glory. During his time with the team, he only managed to accumulate an awful record of 19-52. Obviously, after 5 years with the team, Shula never managed to receive another head coach position within the NFL.

Bert Bell was the Philadelphia Eagles’ head coach from 1963 to 1941 and was far too familiar with losing as opposed to winning as he only managed to win 10 matches out of 58 games.